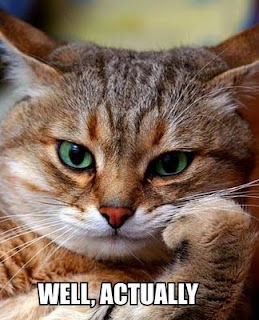 I want to place a restraining order on the word  "actually." Forever, not temporarily. The word has used up its lifetime quota. Overused and misused, it's become a sort of verbal punctuation mark or a space holder. Well, actually. How many sentences now begin that way? Actually, a lot. How many responses begin that way?

When the word is correctly used, it should register some surprise. For example, John has been warned one hundred times not to go to the lake. He knows he shouldn't go. But he goes. When his mother finds out, she might justifiably say, "You actually went?" But if John simply went to the lake as he often does, why would his mother say, "You actually went?" Yet chances are that she will say that.

Or the word should register some contrast between what was expected and what occurred. For example, if you go to a certain vacation spot because you've been told that the weather is amazing, but then it rains every single day, you could justifiably say, "It actually rained every day."

Even on the news programs, I hear the word abused horribly. As commentators assume a casual demeanor, they liberally pepper their commentary with actually. On "Master Chef,"  a tv show I like, when the hopeful chef is asked what ingredients she used, she replies, "I actually used such and such," when there's no need to use that word. We hadn't expected her to use different ingredients. We're informed, but we're not surprised.

The word is a verbal tic. It's driving me nuts. Once I become aware that someone is over-actualizing, I can't stop noticing it. I lose sight of whatever else the person is saying. I'm counting actuallys (or is that actualies?).

When I hear someone overuse, misuse, and abuse actually, I know that person is not a poet. Imagine a poem with actually at the beginning of each line or each line containing one actually. Wouldn't that actually be dreadful?
Posted by Diane Lockward at 7:13 PM