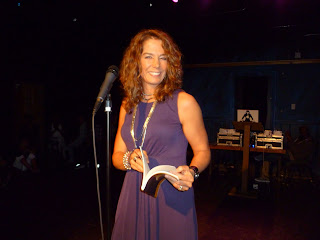 Marie-Elizabeth Mali is the author of Steady, My Gaze (Tebot Bach, 2011) and co-editor with Annie Finch of the forthcoming anthology, Villanelles (Everyman's Library Pocket Poets Series, 2012). She serves as co-curator of louderARTS: The Reading Series and the Page Meets Stage reading series, both in New York City. Her work has appeared in Calyx, Poet Lore, and Rattle, among others. Although we've never met in person, we share a mutual interest in using video with poetry and have often communicated about that. I'm happy to have her here in my poetry home for a salon to celebrate her first full-length poetry book.


DL:  Tell us how you went about writing these poems and assembling them into a collection.

MEM:  About half the poems were written or revised during my MFA program and formed part of my graduate thesis. The rest were written since I graduated. The book went through three major overhauls, including two title changes, as I sent it out over a twelve-month period. At first, I threaded the themes of identity (Venezuelan-Swedish-American), spirituality, politics/war, gender, and relationship throughout the book and had three numbered sections. I then decided to group similarly-themed poems together and title the sections. That allowed for the second and fourth sections to come into focus and mirror each other. They’re both made up of seven short, linked poems. I always intended to start the book with the prologue poem in Spanish. The decision to make its translation the epilogue provided a welcome sense of closure to the book, as well as serving to allow people into the poem who don’t speak Spanish.

DL:  Tell us the story behind your cover.

MEM:  At first I wanted to use an image by a Venezuelan artist for the cover as a nod to how much that part of my identity figures in the first section of the book. After I didn’t find the perfect image, I thought about using Frida Kahlo’s, The Little Deer, since the title poem is an ekphrastic poem based on that painting. But I decided Kahlo’s work is too iconic and would narrow the focus of the book in a way that I didn’t want. I then thought about how much fire imagery there is in my work, both literally, since my grandparents died in a fire, and metaphorically, as an image for transformation and loss. I was chatting with Matthew Dickman at the Dodge Poetry Festival last fall and showed him some images of fire that I was considering and he suggested a lit match (Thank you, Matthew!). I found the photo of a lit match on the Getty stock photo website and immediately knew it was the one. I like how short-lived a match flame is and how it evokes the way some people use a single flame as a focus point for meditation, all of which fit my book’s themes.

DL:  How did you select the title for your book?

MEM:  The title of the book comes from the title poem, an ekphrastic poem based on Frida Kahlo’s painting, The Little Deer, in which a deer pierced with nine arrows wears her face. The steadiness of her gaze in the midst of suffering inspired the book’s title.

DL:  What do you hope readers will take away from your book?

DL:  Please choose a favorite poem for us and, if you like, tell us why you chose this one.

MEM:  I’ve chosen “To the Five-Inch Stilettos I Didn’t Buy Twelve Years Ago” because it’s a fun poem to read. It comes from the third section of the book—titled “I Celebrate the Husband”—in which the poems explore many aspects of gender and relationship. This poem came out of a prompt to write directly to an object you did not acquire. I’d wanted to write about a boyfriend’s foot fetish for a long time but hadn’t found a way in until this prompt. The funny thing is, after writing this poem, I read Brendan Constantine’s “Kink” and discovered that the most common fetish is feet and shoes!

He wanted you more than I did. My boyfriend,
when he was five, would crawl under

his mother’s table when her friends were over.
He’d slip off their high heels and stroke

their feet. They’d ooh and ahh, call him a good boy.
He’d bite his too-red lips to keep from moaning

out loud. He still bit his lips like a nervous squirrel
when we were together. He begged me to buy you,

said I’d never have to walk anywhere, just wear you
to bed with sheer black stockings, seam up the back.

Now I’m with a man who loves my feet, but
doesn’t want to lick each toe while dreaming

of his mother. Yesterday, I got a pair of sky-high
strappy platforms and greeted him at the door,

a taller, sexier version of wife. Smiling, I led him
to bed and he unstrapped them one by one.

Now let's gather round as Marie-Elizabeth reads the poem for us.

Time to step over to the table and help yourself to the treats suggested by Marie-Elizabeth. We have organic blueberries, plain macaroons, mojitos, chocolate-dipped macaroons, and dark chocolate. How decadent—and perfect!

"Wholehearted" is an undervalued word; to my mind it means not blind enthusiasm or unthinking embrace but something more like the full consent of the self to experience, to be present in the glorious and wounding matrix of the here and now. I can't think of a better word for Marie-Elizabeth Mali's poems. She wants "the honeyed sizzle beyond all language,” wants to be a vulnerable and conscious participant in the life of things as they are, awake to love and the struggle to live freely and compassionately.  "How to hold the ocean," she asks, "when the vessel leaks? Rise your wild, / dear animal . . ." —Mark Doty

Before you leave, be sure to pick up a copy of Marie-Elizabeth's book and have her sign it. If you have any questions or comments, please leave them in the Comments section.

You can visit Marie-Elizabeth at her blog.