Poetry and the Corporate World

This past Wednesday I had a wonderful experience. First, I should mention that I have a daughter who works for NY Life in Parsippany, NJ. Back in 2008 the Human Resources person, Christine Birnbaum, initiated a number of programs to empower women in the workplace. A few special programs were scheduled for March, Women's History Month. I was invited to give a reading of poems related to the lives of women. It was a wonderful experience and a real thrill to bring poetry into a place where it isn't usually found. Each year since then the program has grown.

This year's program had a theme: "Our history is our strength." Several weeks ago, Gail Collins, author of When Everything Changed: The Amazing Journey of American Women from 1960 to the Present, spoke to a packed room and to other offices via satellite. She was followed by Julie Johnson, co-author of The Female Vision: Women's Real Power at Work, who spoke about women in the workforce.

This week's program was the "Live Collage." Several months ago my daughter volunteered to be on the committee designing a program for the month. She suggested asking a handful of women to each speak about a woman she admired; together they would form a collage of women and voices. The committee loved the idea and decided to use it. (And then they made my daughter head of the committee!) Because I'd been at the first year's session, they decided to invite me in to read a poem about a woman.

When I was there in 2008, I think there were about 20 people. This year there were over 70! In fact, there was a waiting list. Two screens were set up at the front of the room and power point slides were projected onto them. The one you see below lists inspirational quotations from important women. 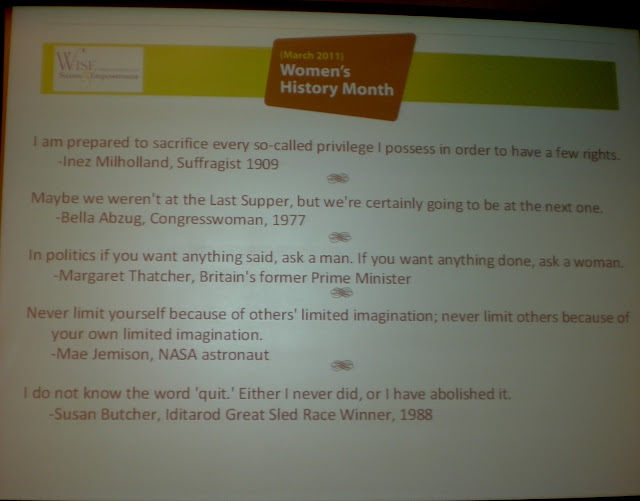 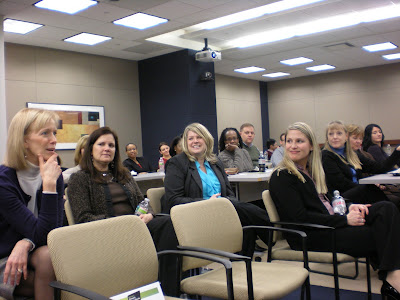 I took this picture as the room was filling. Those empty chairs were soon filled. That's my daughter in the front row. And yes, there are some guys at the back of the room.

Once everyone had arrived, Christine gave a wonderful introduction to the event. And then she gave me a lovely welcome and introduction and called me up. I'd chosen to read my poem, "Eve Argues Against Perfection." I spoke briefly about my feeling that Eve had taken a bum rap for the Fall of Man and that my purpose in writing about her was to have her proclaim the Rise of Woman. Prior to everyone's arrival, my daughter had put an oversized postcard on each chair. Half of the cards had my poem, "The Fruitful Woman," and the other half had my poem, "Pyromania." So everyone went home with a poem gift. 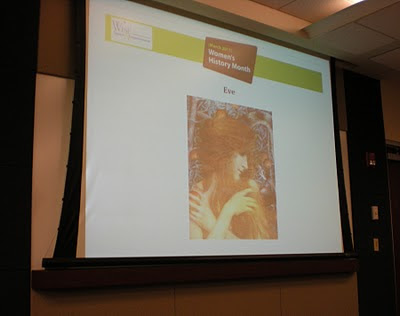 Painting displayed during my part of the program.

And then one by one the six speakers went to the podium. As each woman spoke, a slide of her admired woman appeared on the screen. We heard about Barbara Smith, the opera singer; Maya Angelou, the author; Mary Edwards Walker, a suffragist, physician, and military woman; Dr. Virginia Apgar, the physician who developed the Apgar scale; and Frances Beinecke, an environmental activist and president of the National Resource Development Center. There was one name not familiar to us—Lisa Crilly, a physical therapist who works with special needs children, one of whom is the speaker's daughter who was born with cerebral palsy. Lisa works with the daughter and also helps the mother cope with the challenges of raising a special needs child. She has assured this woman that her daughter "will reach her stars, wherever they are."

The presentations were just fantastic. I learned a lot and was several times brought to the verge of tears. Making the event even nicer was a lovely assortment of sandwiches and cookies. Also, a gift of a mug was given to each presenter, me included. One more thing that made me very happy was finding out that similar Live Collages had taken place in the NYC office, the Westwood office, and an office in Massachusetts.

What a nice way to celebrate Women's History Month and make way for National Poetry Month.

Posted by Diane Lockward at 9:48 AM