Poem: a conversation between painting and poetry

I've had a lovely surprise, a surprise, though, only because my memory failed me. Many moons ago my publisher forwarded to me a request for permission to reprint my poem, "Blueberry." The request came from painter Judith Greenwald who was planning an exhibit of the paintings she'd done under the influence of poems. Each painting was to be paired with its poem. Of course, we said yes. And then I forgot all about it.

Then last week poet Alice B. Fogel sent me a note saying that she'd read something from the book to a group of people and discovered that my poem was in the book. Book? What book? Alice described the book and the project and the dim bulb of memory snapped on. I went into my old mail and discovered the original note from Judith. Alice put me in touch with Judith. I asked if there were any books left. Yes! And now one is in my hands.

The exhibit was held April 27-May 22, 2010, at the Ceres Gallery in NYC. Eventually the paintings will be added to Judith's website. The book is not available via Amazon or bookstores, but Judith does have some copies left, $35 each which includes postage. You can contact her by email: judithgreenwald@gmail.com

Judith has kindly given me permission to share her introduction with you:


Poems have been variously described as soul-making, life-cherishing and lifesaving. They have been referred to as gifts, surprises, prayers and challenges. They have been seen as providing intimacy, comfort, pleasure, discovery, rebirth, arousal, magic, music and connection.

Each painting in this show has been inspired by a poem. Whatever the communication has been, I have received it in my own way, taken it in, tasted and ingested it. I have read each poem time and again, both silently and aloud, heard its melodious sounds, felt its powerful rhythms. I have gone back to certain phrases and read them yet again. From this, an image has formed, perhaps consciously, more likely not. It may be just a color, perhaps a shape, or even a texture.

I live with the poem for awhile and let it work on my unconscious. I meditate on it. I make it my own. Once I commit a mark to the surface, the painting/poem has a life of its own. I go back and forth to the poem yet it remains well in the background as this continued creation is driven by its own forces, its own need for meaning and expression.

The completed piece has some relationship to the original poem which sparked it, yet it has its own integrity. Then I offer it to you, my audience, to take the act of creation a step further, to see what you see, to let what's implicit in you take form, to let your own meanings arise and develop. These paintings and the poems that preceded them are co-creations. Each of us—the author, the painter, the audience—with every moment of engagement, is giving birth to some part of ourselves over and over.

The paintings, then, represent a conversation or dialogue with the poet and her or his poem, with the canvas and the color, the texture and the form, and with you, the viewer. We all share in creating meaning and value and, ultimately, authorship in an activity which is both deeply solitary and profoundly communal.

Here's the painting that Blueberry gave birth to. I love the way serendipity sometimes happens. I love knowing that my work influenced someone else's. And I love this book. 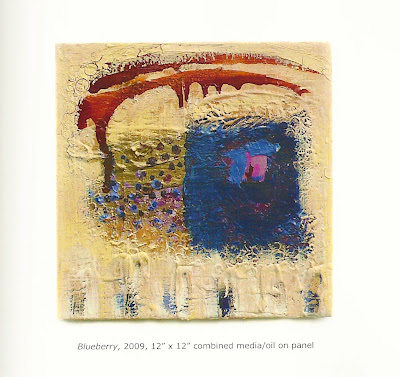 Posted by Diane Lockward at 9:59 AM