Thank you all for the nice notes about my Verse Daily poem, Birdhouse. I challenged you to identify the form. Sadly, no one rose to that challenge! So I will now solve the mystery. It's an Anagram poem. I have five of them in my new book, one in each section.

I was introduced to this form by a friend. She'd just learned it in a workshop with Terrance Hayes. He has a bunch in his book, Wind in a Box, and defines the form in his end notes. You begin by choosing a word of substantial length. Then you quickly make as many words as you can from the letters in that word. You need a list of at least eleven words, but more is better. Hayes stipulates that all words must be four or more letters and words cannot be formed by the addition of an "s." I am not that strict. 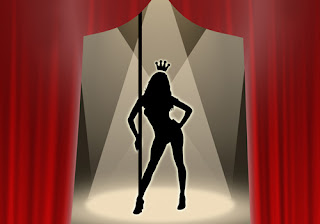 For a second example, here's another anagram from my book. I'd recently come across the word "ecdysiast" and fallen in love with it, so it was one I wanted to work with. If you first just glance at the end words of my poem, you'll see that all of them—easy, cast, act, Yes, desist, and so on—are made up of letters from my lead word. You are free to not use the lead word as your title, but I think that there should be a connection between that word and the content of the poem. Now read the poem. Then read it aloud.

You think it's easy
to unravel the boa of feathers and cast
it off, to turn the act
of undressing into an art, suggest Yes
to each hungry face, go just so far and then desist?

Not one can touch, but all must leave feeling sated.

Sequins sparkle as she slinks across the dais,
peels the skirt and tosses it as if rolling dice,
and then the bustier, hook by hook, and thrown aside,
a spider molting, her gaze at once smoldering and icy,
the swivel of hips, to keep the tease slow and steady.


I hope that you noticed the sounds as you read. Lots of rhymes and near rhymes, assonance and consonance. For me, one of the really appealing aspects of this form is the sounds that result. You can't help but get music into the poem.

Now you know what's coming next, don't you? A challenge: Write your own anagram. Warning: This form is addictive. You'll find yourself working on words in your head when you ought to be paying attention to other things. So what! Enjoy.
Posted by Diane Lockward at 7:13 AM