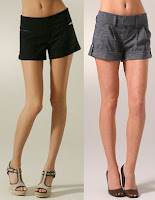 Short short poems, that is. I have to admit that I've been leery of them for years. There doesn't seem to be enough to grab my interest, not enough there to leave me pondering, not enough to call me back for repeated readings. I've never been able to muster up much interest in haiku which usually strike me as little exercises. (21st-century apology inserted here to all haiku lovers and poets.)

I heard Kay Ryan refer to her own poems as "snack poems." That's how I felt about really short poems, i.e., a snack but not a meal.

Then I found that from time to time I came across a short poem that knocked my socks off. I started collecting them like shells. Some of them called to me late at night.

I found myself trying my hand at a few shorties. I distrusted them and put them away. Too short to get a major role in a journal.

Then several months ago I was asked to submit some work to a nice online journal. I noticed that the poems in that journal tended to be short, so I dug out some of my little ones and sent them off. Two grabbed right up! I submitted a few of my formal ones to another journal. Two more snatched up. Had I been unfair to my own poems?

Before I ruin my appetite with any more of these metaphors, I want to offer you two short poems by Lola Haskins, both of them perfect gems, I think, and both from her book Desire Lines: New and Selected Poems.
Speaking of metaphors!

Here's another short one by Haskins: 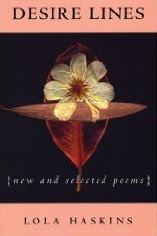 Posted by Diane Lockward at 3:27 PM