I've been thinking about the influence that place has on our poems. It seems to me that if we move around a bit we can't help but gather new ideas, new images, new metaphors that somehow worm their way into poems even if not immediately. I'm not talking big-time travel here. There are unfamiliar locales right around the corner.

A few years ago I went to a daytime poetry reading in a nearby town. The reading was held on the grounds of an arboretum. Although it was April and we'd had some nice spring weather, that day made a complete reversal back to winter. On my way to the event, it started to snow, then sleet. By the time I arrived at my destination, the ground was covered with a wet, sloppy mush.

The reading was held in a house on the grounds. The reading room was surrounded on three sides by ceiling to floor windows. As the reading progressed, suddenly a bunch of goldfinches appeared outside the window right behind the reader. A feeder was hanging just outside that window. These birds were so adorable and playful that I lost all concentration on the reading.

I took home with me the image of those birds swirling around as if showing off for us. I was, however, disappointed not to have been able to walk the grounds and enjoy the trees and flowers. From the window I could see them weighted down by the slush. So that image went home with me also. And the disparity between the spring we were supposed to be having and the winter that had replaced it.

Those images swirled around in my head for days, signaling a poem was coming. That poem did come, April at the Arboretum. That day also ignited an interest in birds. I bought some goldfinch feeders and enjoyed a profusion of goldfinches that summer. Since then, however, those birds seem to have abandoned me. I am now attempting to tempt them back. 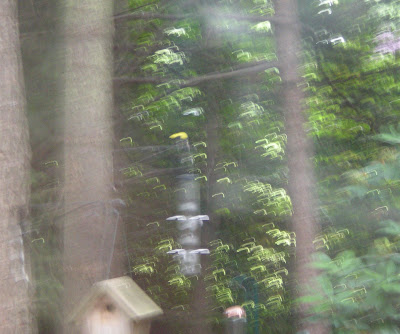 See that spot of yellow at the center? That's the goldfinch that showed up briefly yesterday.

A week ago I enjoyed a day of writing new work with a group of other women poets. We met at the home of one of the women. The summer after the arboretum experience this woman had been at my house and was intrigued by my birds. She then bought a bunch of feeders and she and her husband created a lovely sanctuary. So this year we women poets were entranced by her birds. Throughout the day we took turns giving each other poetry prompts. It was amazing to see how many of those poems had something to do with birds. That's what got me thinking about the influence of place on poetry.

That's what gave me a serious case of bird envy. And that's what got me to the bird store where I bought a bunch of new feeders. Now I have been engaged for a week in a battle with squirrels. More on that in my next post.

Posted by Diane Lockward at 3:41 PM