At the Poetry Salon I recently attended I read my poem "Invective Against the Bumblebee." The poem begins as follows:

Escapee from a tight cell, yellow-streaked,
sex-deprived sycophant to a queen,
you have dug divots in my yard
and like a squatter trespassed in my garage.

Now when that poem was first published in the journal PMS: PoemMemoirStory, line 4 of the above stanza read "and borne a hole through my garage door." I was satisfied with that line, and I clearly remembered those dreadful bumblebees making their ugly holes in the garage door of our first house. So the image seemed right to me.

However, when I was assembling my second manuscript, I sent the collection to a friend for editing. She told me most emphatically that I was flat-out wrong. Those weren't bumblebees; they were carpenter bees. I wasn't at all happy to hear that. And did it really even matter?

I did some research and discovered that my reader was absolutely right and I was wrong. And I decided that it did matter. The line was presented as factually accurate and so it needed to be right. The poem is a curse poem in which I hurl one accusation after another at the bumblebee. All the other accusations are factually accurate. I went back to the poem and reworked that line. It was frustrating, but as so often happens when we are forced into a late revision, I think I ended up with a better line. It's certainly more musical.

So that's the poem that went into the book. After the reading was over on Sunday and everyone was chatting and devouring goodies, a woman I didn't know informed me that bumblebees are not yellow-streaked. You can imagine that I was not happy to hear that! I was so sure they were. And I was sure that my earlier reader who is very nature-savvy would not have let such an error get by her. But the woman was so insistent that I had to wonder if she might be right.

As soon as I got home, I did a quick Google search. Here's the definition I found for "bumblebees": "common name for any of a group of large, hairy, usually black-and-yellow, social bees." See that yellow part? Victory! And for further proof, here's a picture. See the yellow? 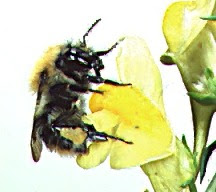 A friend I told about this said it didn't matter anyhow, that the line needn't be literal. I disagree. I think that if the information is presented as factual then it should be accurate. If I'm writing about a dream or a trip to fantasy land, I can play fast and loose with the facts, but not when what I'm presenting is presented as reality. I wanted to suggest that the bumblebee was cowardly in its attack on a child. If I'd stuck with my original line, I would have had that implication but would have lost the accuracy of the image. I wanted both implication and accuracy. Happily, I've ended up with both.