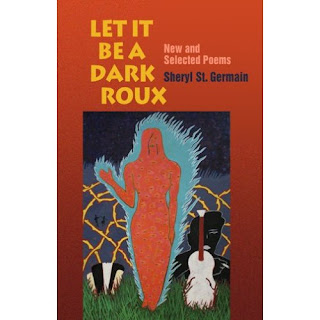 It's always exciting to come across a poet who knocks you out. That's the effect Sheryl St. Germain had on me. I don't know why I didn't know her work as she's been around a while and has published a number of books. Although she now lives in Pittsburgh, she is originally a New Orleans poet. That background permeates her work. This is the poem that hooked me:

Two young bucks come daily to eat.
Their nubs of antlers are almost
pushing through skin. It must hurt,
like new teeth almost erupting through
gums, the gums sore and red and full
of tooth. This is what it is like
to want you. Long days while
the gleaming white thing
grows larger under skin that weeps daily,
wanting to be broken.


The poem continues to fascinate me. In spite of its brevity, it packs a wallop. It's that simile in the middle, the sentence that turns the poem, that hinge on which the poem rests. A little bit of description, a little bit of speculation, then the leap to the personal, to that simile, then that simile extended.

I couldn't get the poem out of my head. I wanted more, so I ordered St. Germain's collection, Let It Be a Dark Roux: New and Selected Poems, from Autumn House Press. A new and selected always strikes me as a kind of trade-off. You lose the arc of each individual collection, the sense of wholeness that a well-organized collection has. But you gain the trajectory of a poet's growth. You see what's changed, what's remained constant. You see the poet's obsessions and tics.

The South remains a constant in St. Germain's work, especially the distinguishing characteristics of Louisiana, of New Orleans. There's lots of local color, the thick air, the music, the gumbo, the fish. Family matters, sex and the body do, too. There's a consistent underbelly, a fascination with the darkness. A delicious darkness, sexy and dangerous, intoxicating. Here's another poem that left me reeling.

The truth is I loved it,
the whole ritual of it,
the way he would fist up his arm, then
hold it out so trusting and bare,
the vein pushed up all blue and throbbing
and wanting to be pierced,
his opposite hand gripped tight as death
around the upper arm,

the way I would try to enter the vein,
almost parallel to the arm,
push lightly but firmly, not
too deep,
you don't want to go through
the vein, just in,
then pull back until you see
blood, then

hold the needle very still, slowly
shoot him with it.
Like that I would enter him,
slowly, slowly, very still,
don't move,
then he would let the fist out,
loosen his grip on the upper arm--

and oh, the movement of his lips
when he asked that I open my arms.
How careful,
how good he was, sliding
the needle silver and slender
so easily into me, as though
my skin and veins were made for it,
and when he had finished, pulled
it out, I would be coming
in my fingers, hands, my ear lobes
were coming, heart, thighs,
tongue, eyes and brain were coming,
thick and brilliant as the last thin match
against a homeless bitter cold.

I even loved the pin-sized bruises,
I would finger them alone in my room
like marks of passion;
by the time they turned yellow,
my dreams were full of needles.

We both took lovers who loved
this entering and being entered,
but when he brought over the
pale-faced girl so full of needle holes
he had to lay her on her back
like a corpse and stick the needle
over and over in her ankle veins
to find one that wasn't weary
of all that joy, I became sick
with it, but

you know, it still stalks my dreams,
and deaths make no difference:
there is only the body's huge wanting.

When I think of my brother
all spilled out on the floor
I say nothing to anyone.
I know what it's like to want joy
at any cost.


I'm happy to recommend this book and this poet. The work is full of jazz and blues, cooking odors, the aroma of sex, the joy of love, too much drinking and substance abuse, a hard-won sobriety. There's New Orleans before and after Katrina. Short poems, long ones, poems in sections. Lots of variety. Lots of passion. Poems that wail their blues and go to the heart. Poems that matter.

Posted by Diane Lockward at 2:33 PM