The Making of a Poet 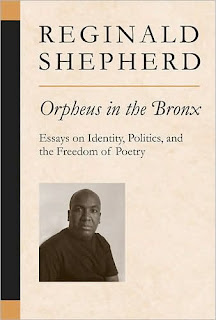 I just finished reading a wonderful essay in the January / February issue of Poets & Writers. It's titled "To Make Me Who I Am: Poetry As a Way Out" and is by Reginald Shepherd. I feel like I've made a new friend, though I've never met Reginald. The content of his essay is fascinating and took me into a world very different from my own. Although the poet writes about the hardships he endured, he does so without self-pity, though he's entitled to a good dose of that. Instead, there's encouragement for those who have to struggle in this life. Raised in the ghetto only by his mother, he was sent to private schools where he received the advantage of a good education but where he never felt like he belonged. When he was just shy of 15, his mother died and he was sent off to be raised by relatives who made him feel like an outsider.

Throughout his difficult growing up—and he never pretends it was anything other than difficult—what saved Shepherd was poetry. He writes about discovering T. S. Eliot: "Eliot wrote that poetry is not the expression of personality and emotion but the escape from them. He also wrote that only those who have personality and emotions know what it means to wish to escape from these things, a marvelously bitchy comment that also contains a profound truth about the burden of identity, the suffocating weight of selfhood." He writes about imitating Eliot while struggling to become a poet himself, to move beyond his "personal needs and desires, beyond the poem as personal expression and toward the poem as an independent object in the world."

Poetry, Shepherd writes, was what kept him sane. That and books and the library. After high school he went off to Bennington College. He speaks of two teachers who had a profound influence on him. For example, from Ben Belitt he learned that "art is the lie that tells the truth, and that the truth art tells need not be about oneself." That's an education right there. Yet Shepherd dropped out of college at the end of his junior year, worked for a time, then returned and completed his degree, then went on to earn two MFAs. He writes of the never-ending search to find the place that is right for him, a place that seems elusive but which he is optimistic enough to believe exists.

This essay is full of wisdom, full of the rough fabric of real life, and it's beautifully written. I was delighted when I reached the end of it to learn that it's one essay in a collection of essays by Shepherd: Orpheus in the Bronx: Essays on Identity, Politics, and the Freedom of Poetry. So I immediately pre-ordered it.

While I was at it, I also ordered Fata Morgana, Shepherd's most recent poetry collection. And while I was treating myself, I also ordered Paul Guest's Notes for My Body Double and Greg Rappleye's Figured Dark. My bookshelf runneth over.

I've also added Reginald Shepherd to my blogroll. Pay him a visit. His blog is like graduate school without the burden of tuition. But I was sorry to read that he is beginning a round of chemotherapy. So let's all send good thoughts his way. Some humanotherapy.
Posted by Diane Lockward at 2:38 PM