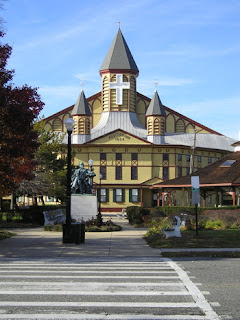 I have a few more things to add about the poetry retreat. In my last post I told you about the retreat itself. Now I'd like to tell you a bit more about Ocean Grove as the town added to the pleasure of the retreat. Ocean Grove has a long history and is best known for its religious revivals that still take place each summer. Hundreds of Methodists gather to vacation and receive spiritual renewal. The central gathering place is the Great Auditorium. This large building is at the end of a square. Directly ahead of this building is the grassy square where birds gather and people walk and bike. Our inn is to one side of the square. Across from us is another row of houses and inns. At the opposite end of the square is the boardwalk and just beyond that the beach and ocean.

To the immediate left of the Auditorium is Tent City. In summer the small structures in the front row are covered with tent fabric and people live in them for the time of their stay. The tents have no plumbing and neither do the cottages behind them. Residents use the public facilities found on the other side of the Auditorium. As the Methodists are present only in summer, these buildings were empty during our stay. 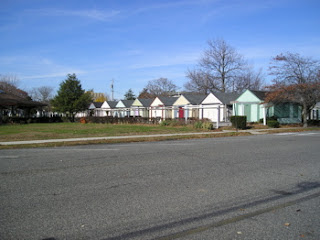 But Ocean Grove, while quiet, has lots of activity going on. The town has become home to many artists and writers. One aspect of the town that I find fascinating is its condition of revival. Not too long ago, Ocean Grove was pretty much tired and old with the houses and buildings in a state of disrepair. Now many of these places are under reconstruction. So as you walk around you get a feeling of Before and After. Here are two buildings that are awaiting reconstruction: 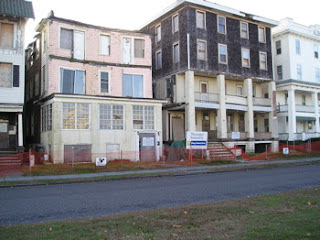 Here's one that recently underwent reconstruction: 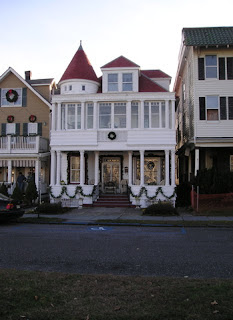 One element of the old: Ocean Grove remains a dry town. No liquor licenses in any of the restaurants, though patrons can bring wine (a concession to modernity) and no liquor stores. Not too long ago residents and vacationers alike had to remove their cars by midnight Saturday night and could not bring them back into town until midnight on Sunday. People moved on foot only.

Our innkeeper told us that just several weeks ago a film was made in Ocean Grove. Its title is Greta and it stars Ellen Burstyn, Hillary Duff, and Diana Ross' son. Apparently, the entire cast lived in Ocean Grove during the time of the filming. Ellen Burstyn plays the role of a grandmother whose granddaughter comes to visit. The house where the film takes place is right across the square from our inn: 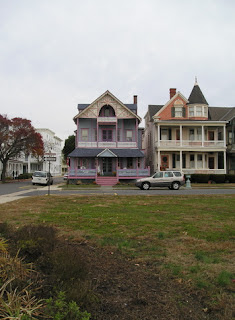 It's the one to the left.

Finally, I'm going to offer you one of the prompts we did during the retreat. This one comes from Susan Jackson: "If you didn't have to do it perfectly, what would you try?" Susan offered the following list:
Stand-up comedy
Modern dance
Archery
Water ballet
Red lipstick
or anything else

I chose anything else and wrote my poem about being a rock star.
Posted by Diane Lockward at 1:27 PM