An Invented Form: The Gigan 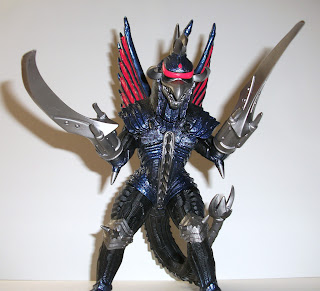 I love invented forms, the challenge of them, the risks they entail. So when I recently learned of the Gigan, I pounced on it. This form was invented by poet Ruth Ellen Kocher. Kocher named the form in honor of her favorite monster from Godzilla.

You can sample a number of Kocher's gigans online at From the Fishouse. The text of each poem is provided, along with an audio of the poet reading the poem.

You can also listen to Kocher talk about her gigan project. The talk is just a bit over 2 minutes.

Here's a sample gigan from Kocher:

i would give up anjou pears for you, and their cousins
the bosque, which are more beautiful, wrapped ochre,

wrapped gold around their small deaths--wrapped securely
as though they know an old friend will call, say love, say
no. and this old friend, he would die for a crust of earth

peeled back to reveal some buried bliss, a dance of bees
singing out the ruined pleasure of their battle, their lavish

avenues of forsythia, their swank arias of roses, inked roses,
sung roses that want most to be the silk worm’s slink and cower.

pity them, their faithless world, their bruised
and darkening red. i would give up anjou pears for you.

i would peel away their splendorous backs to reveal the equation
we build our hunger upon, the dank musk of decay turned sweet,
the soil’s woe begotten centuries mulched into pollen, nectar.

think of the silk worm’s desire--its dreams of mulberry leaf,
its singular drive toward the green silhouette of rapture.

her name was ella, elle, french for all woman,
everywoman, she, the third person, feminine,

hippy, buxom, regal curls piled atop her head,
soft shiny crown for her diamond voice, the soaring
swooping bird, the orchestra in her throat, the stars

in her eyes, the star in front of her eyes each night,
one week, at the mocambo, her name was norma,

she wasn't normal, blonde, her name was marilyn,
the i in angelic, first person, created, an immaculate

concept, the image of pure beauty, sound, power,
her name was ella, elle in french, all women,

in her, i's, the star in front of her eyes, each night,
glamorous, first lady of song, iconic, backstage,
the effort behind the effortlessness, the exercise,

the training, the makeup that made up the woman,
her name was norma, marilyn, ella, est-elle, the star.