The Poet on the Poem: Lance Larsen

I'm very pleased to have Lance Larsen as the featured poet for The Poet on the Poem. I think you'll enjoy his poem and his discussion of it. Then I'm also sure you'll want to get his new book, Genius Loci. 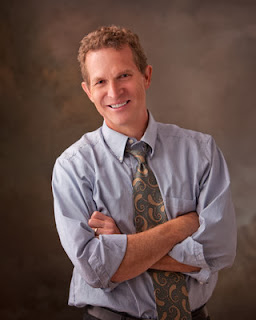 Lance Larsen’s fourth collection of poems, Genius Loci, was recently published by the University of Tampa Press. His earlier collections include Backyard Alchemy (2009), In All Their Animal Brilliance (2005), and Erasable Walls (1998). His work appears in such venues as Georgia Review, Southern Review, Ploughshares, Poetry, The Pushcart Prize Anthology, and Poetry Daily. He collects antiques, plays basketball, occasionally walks on his hands, grows daylilies, hikes, and loves Indian and Thai food. He sometimes collaborates with his wife, Jacqui Biggs Larsen, a painter and multi-media artist, who provided the art for the cover of Genius Loci. Since 1993 he has taught literature and creative writing at BYU, where he currently serves as associate chair. In 2012, he was named to a five-year term as Utah Poet Laureate.

To spell you is to drown in vowels, to pronounce
you is to let guttural joy form in the back
of my throat, then roll forth,
like northern lights booming above a logging
camp in Michigan. Disappointed
in my metaphor? What did you expect from a man?

If only I had an estrogen factory of my own.
If only I could feel the fluttery,
everywhere she-pleasure you bring to lucky
women. I mean the buzz that overtakes
a new mother nursing in a booth at Denny’s,
eyes blissing out, body serenely electric.

I mean whatever state my cousin Erica falls
into when someone braids her hair
in the middle of church—simple Erica
who washes tables at McDonald’s
but can’t read a menu. She knows
enough to close her eyes and give pleasure

more room, knows enough to let purrs
bubble from her mouth, the liquid gold
on her head dividing into glorious threes,
my jealousy tripling. Do you sometimes
make exceptions and visit not just
the Ericas of the world, but the Erics?

I’m thinking of the twenty-something kid
last week who popped up from his seat
and ran to the front of the bus.
That’s my old man, he said, pointing
to the cement truck stopped beside us
at a red light. Hey Dad, I’m over here, look,

and Ernie, our glum undertaker of a driver,
broke the rules for once and swung
open the door at the intersection.
Surely you must have blessed that transaction:
grizzled duffer and tattooed boy leaning
towards each other, like a pair of gargoyles,

air crackling between them. The light turned
green, the afternoon sped up, and the duffer
said, Hey Tommy, nice hat, you ready
for bowling Saturday night?—take her easy.
Who can explain where the world ends and a son
begins, how molecules of longing map the body?

They waved, father and son, like they’d never
see each other again in this time zone.
And we watched: starved, eavesdropping citizens
of the bus, remembering some ecstasy
we fell into once and didn’t deserve, sitting
on our hands to keep from adding amens to the air.


DL: I admire this poem for the risks it takes. I'm struck, for example, by the audacity of titling the poem with a word that most likely almost nobody knows. Why an ode to "jouissance"?

LL: Ever since discovering the term in a French feminism class at Rice University, I’ve been fascinated by jouissance—the notion that women enjoy a less localized, more all-pervasive evolution of pleasure. How could I not be fascinated? It’s a pretty heady experience to read Cixous, Kristeva, and Luce Irigaray for the first time. My title might be off-putting to some, at least at first, but I’m old-fashioned enough to believe that readers, especially of poetry, have dictionaries attached to their bodies the way they have eyelashes and ears. The challenge was to write a poem that dramatizes the differences between male and female desire in such a way that the reader doesn’t need a dictionary at all. Whether I’ve pulled that off is a separate question. I’m not entirely clear now what got me to the title. Either I started with jouissance and canvassed my brain for the kind of sensory detail that would bring the term alive. Or I had these unshakeable sensory impressions and went looking for the appropriate catalyst that would allow Erica and Eric to co-exist in the same poem. While the conceptual dimension of a poem is crucial, the particulars are what provide ballast and launch: the sound of the words, the image, the metaphors, the syntax, the sublime grit that sticks a poem to the page.

DL: Tell us about your use of direct address and the function of the questions you pose to Jouissance.

LL: One can write moving odes in third-person, but these often tend towards a chaste distance poetically—observation rather than drama. I like the intimacy one gains with direct address. As one critic says—I think it was Barbara Smith discussing Gwendolyn Brooks’ “the mother”—if one can create a you that can hear and understand, one in turn creates an I worth listening to. Something like that. Apostrophe is one of the most shamelessly artificial of literary devices but it pulls us in nonetheless, and the great poets are not above using it. Think, for instance, of Keats in “Ode on a Grecian Urn”: “What men or gods are these? What maidens loth? What mad pursuit? What struggle to escape?” Most odes have a circular quality to them, an argument that moves away from the speaker then returns. Direct address helps to facilitate this movement of thinking on the page.

DL: Your speaker straddles the line between rudeness and kindness as he names his cousin "simple Erica" but then transforms her into the dispenser of pleasure, someone who "purrs" and has "liquid gold / on her head." Tell us about the craft that went into this balance.

LL: As a beginning writer I was driven by a search for felicitous language and image. While I’ve never abandoned these pursuits, I’m increasingly interested in shifts in tone and contradiction, in irony. I like flawed speakers who get themselves into a little trouble, as this narrator does. By condescending to Erica—it is very un-PC to use the word “retarded,” for example—he digs a hole for himself, which he then has to crawl out of. Of course, in his double mindedness, he introduces an Erica that is more contradictory and multivalent, more human, than if he had settled for a character of simple sweetness and light. In a way, the poem dramatizes the dangers of overthinking—that is, of privileging book smarts over more authentic primary experience. What is it Keats says in one of his letters? “Oh for a life of sensations rather than of thoughts.” In the end, the narrator ends up envying Erica for her life of sensation, for her ability to give herself to simple pleasures, pleasures which I hope the reader can taste in the language of the poem.

DL: At the midway point you skillfully turn the poem, moving from the feminine to the masculine. In effect, your speaker gets what he wants and makes Jouissance do his bidding. How did you contrive to make the poem turn so smoothly?

LL: I don’t know about jouissance doing his bidding. Perhaps that turn is more my lucking into something. In the middle of a draft, frustrated because I didn’t know what should come next, I noticed that the word “Eric” (which happens to be my middle name) was embedded in “Erica.” An obvious thing to most readers but it wasn’t to me. I love the story about Yeats reading final galleys of one of his books. In describing a woman’s face, he had written “mass of shadows,” but his phrase came back from the printer as “mess of shadows.” He was wise enough to keep the mistake. Poems often know more than their creators, and when we’re wise enough, we know when to keep mistakes and serendipitous accidents. The poem may turn smoothly, but this doesn’t mean we should trust it—at least not completely. Some readers may see this final move in the poem as a kind of male appropriation, which doesn’t bother me in the least. The poem is about vicarious experience. About being in one body and many bodies simultaneously.  Or wanting to be. Though the poem ends in celebration, I’m well aware that it begins in lack. In other words, I’m open to an ironic and more skeptical reading.

DL: There's a formal elegance to this poem. You have eight 6-line stanzas and fairly even line lengths. At what point in writing the poem did you decide to use 6-line stanzas? What manipulations had to occur?

LL: I committed to six-line stanzas midway in the writing after I had much but not all of the poem’s language. This decision propelled the poem through an additional series of revisions. I tightened and re-configured, cutting whenever possible. I’m one who winnows and distills down. Regular stanzas invited me to see the poem as a series of crescendoes and pauses accumulating over two pages: how to make that progression as organic as possible? I always work for a mix of end-stopped and enjambed lines, which replicates breathing and movement, hesitation and lunge. I like this stage of revision, not unlike my father tying flies, which he used to do late in the evening. Without the close work of tweezers and magnifying glass, I know I’ve got little more than chopped prose. According to Sandra McPherson, a successful line holds at least two surprises. If one of my lines fails this test, if a stanza isn’t compelling in its own right regardless of the larger task it’s doing in the poem, then I have more work to do.