Sometimes It's Good to Be for the Birds 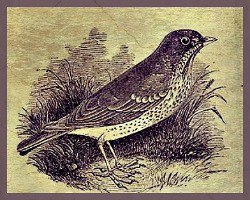 That is, if you're talking about Thrush Poetry Journal. This is a newish online journal, the child of poet Helen Vitoria. Departing from the more usual 1-4 issues per year, this journal appears every other month. Because of the increased frequency of the journal's appearance, each issue includes a limited number of poets. The current March issue includes 15 poets, each with one to six poems. And that's it. No essays, no reviews, no art. Just pure poetry.

Naturally, I'm delighted to be one of those poets. My poem Dreaming to Lionel Richie’s “Dancing on the Ceiling” is included. The muse for the poem was Philip F. Deaver's poem, Flying, which appeared on The Writer's Almanac back in 2005. Because I liked the poem, I saved it. You never know when you might need a poem.

I subsequently used Deaver's poem as the stimulus for a prompt in my Poetry Newsletter. As I often do, I wrote my own poem first. After all, I choose poems that do something I'd like to do. I like it when poems talk to each other, when one poem sets another in motion. Deaver's poem and the prompt will be in my forthcoming book, The Crafty Poet.

Thrush is attractively designed and Vitoria is working social media to the journal's advantage—and to the benefit of her poets and readers. She has a personal page and a journal page on Facebook and regularly posts notices and links to the journal and individual poems. This undoubtedly increases her readership and broadens exposure for the poets. The day this current issue went live her site received close to 3000 visits. Vitoria is undoubtedly also increasing the popularity of her online journal by giving a quick response to submissions. My acceptance came with a lovely personal note about the poem. I realize that not all editors can do this, but I appreciate it when it happens.

I also have a poem, His Two Arms, at Zocalo Public Square. This poem, previously published in my book, What Feeds Us, was taken by Zocalo more than a year ago. I'd sort of forgotten about it, so finding it there came as a nice surprise. The poetry editor, Stephanie Brown, took four of my poems. This is the last of that group. Brown said she liked this poem because it's rare to find a love poem by a woman about a man. Is it?