Do You Dare Talk about Syntax? 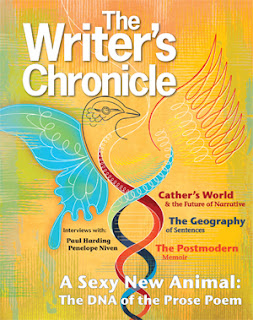 I love syntax but wouldn't dare mention it in public. It's not something normal people talk about. But then writers aren't all that normal, are they?

I was delighted, actually a bit thrilled, to discover an article in this month's The Writer's Chronicle on this very topic. "The Geography of Sentences" is by Emily Brisse, a high school English teacher (yay, Emily!) and writer. The title is particularly apt as this Minnesota writer is apparently also an amateur naturalist.

Adapted from Emily's MFA graduate lecture at Vermont College of Fine Arts, the article tackles the subject few writers want to tackle: syntax. It's a topic we know is important, but it's a hard concept to pin down and talk about. Even when we're working on syntax, we often have a hard time defining what we're doing or articulating why it's important.

What do we mean when we say that a piece of writing is wonderful, beautiful, or moving? We might mean that we liked the images, the metaphors, the word choices. We have no problem pointing to examples of those. But we also probably mean that we liked the sentences, that is, the syntax, and that we have a harder time illustrating and talking about.

And yet, as Emily points out, syntax is one of the elements we need to work on in our revisions. She regards  the sentence as "one of our most powerful tools." To illustrate what she means by sentences with good syntax, the ones she refers to as "magical incantations," she frequently quotes from Louise Erdrich' s Love Medicine.

Although the focus of the article is on prose, poets will find the article just as valuable as prose writers will, maybe even more so. A prose writer can get away with a few bad sentences; a poet can't. Emily considers that old bugaboo—grammar—but she's more interested in how writers "manipulate chunks of language . . . to achieve certain effects," how they use syntax to increase the intensity of words and to move the reader. We can do this without being able to name the grammatical parts of the sentence.

What is the effect of a short sentence? a long one? an alternation between the two? a fragment? What happens if you move this part of your sentence to another part of the sentence? if you reverse the order of words? if you delay the verb until the end of the sentence? Emily is interested in how the arrangement of words in a sentence conveys and enhances meaning. She's also interested in the way a sentence looks (its shape), and she's interested in how it means. She also considers the syntax as symbol—something I'd never thought of before.

I found this article enlightening and useful. It's making me look more closely at lines and sentences. It will do the same for you. It's even making me talk in public about syntax.

By the way, if you're not already subscribing to The Writer's Chronicle, correct that error as soon as possible.

Here's a syntax challenge for you: Using an egg as your topic, write a poem that's one long sentence. Keep it going for at least 30 lines of substantial length. Put it away. Go back to it. Now break that sentence into smaller parts. Some parts sentences. Some not.

Posted by Diane Lockward at 1:26 PM