Louder Than a Bomb 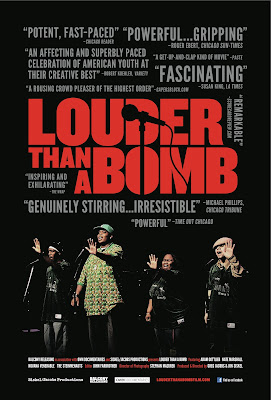 Here's a documentary film I can't wait to see. This description makes it sound like the kind of movie I love:

"Louder Than a Bomb tells the story of four Chicago high school poetry teams as they prepare to compete in the world's largest youth slam. By turns hopeful and heartbreaking, the film captures the turbulent lives of these unforgettable kids, exploring the ways writing shapes their world, and vice versa. Louder Than a Bomb is not about "high school poetry" as we often think of it. It's about language as a joyful release, irrepressibly talented teenagers obsessed with making words dance. While the topics they tackle are often deeply personal, what they put into their poems—and what they get out of them—is universal: the defining work of finding one's voice."

Here's what the critics have said so far:

"Winner of more than a dozen film festival prizes, including seven audience awards, Louder Than a Bomb has been hailed as "powerful and exhilarating" (TimeOut Chicago), "inspiring" (L.A. Times), "irresistible" (Chicago Tribune), "a get-up-and-clap kind of movie" (Paste), "vibrant and moving" (The Wrap), and "a celebration of American youth at their creative best" (Variety)."

As a poet I can't resist a film about poetry. As a former high school English teacher, I hope that teachers across the U.S. will encourage their students to see this film, not because I want young people to believe that the only kind of real poetry or the best kind of poetry is slam poetry, but because I want them to know that poetry matters, that it can change lives, that it can make the world a better place. If I were still a teacher, I'd take my classes on a field trip to see this film!

Posted by Diane Lockward at 1:00 PM

Email ThisBlogThis!Share to TwitterShare to FacebookShare to Pinterest
Labels: louder than a bomb, poetry movie, slam poetry, teens and poetry