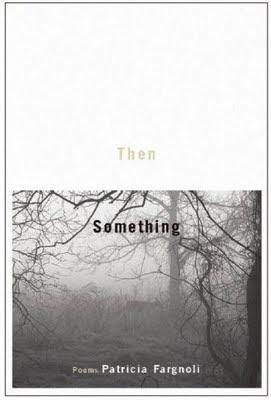 (Click Cover for Amazon)
Here's good news: Patricia Fargnoli's third poetry book, Then, Something, is now available from Tupelo Press which published her last book, Duties of the Spirit. This new collection moves naturally and gracefully beyond the earlier one; it is both a continuation and an expansion.

We find some of the same motifs that Fargnoli has explored before—aging, nature, family. But this collection is intriguingly united by other motifs as well. It opens with the poem, "Wherever you are going," our introduction to the idea of departure. This anticipation of leaving is then revisited in other poems staggered throughout the collection. In poems such as "Approaching Seventy" and "After the Dream of My Death," the speaker stands at the very threshold of old age and is keenly aware of moving closer to death. Appropriately, these themes are underscored by a walking motif that weaves in and out of the collection. We sense the speaker heading towards a destination or trying to find one.

Nature is very much a part of this journey. Interlaced throughout the poems are numerous references to water—the ocean, lakes, snow, rain, fog. We also find numerous references to coldness and darkness, to alternating "flashes of light and shadow." We feel that the speaker is at odds with Nature, yet finds it a source of comfort. Such contrasts and conflicts provide a richly satisfying texture.

While the sense of impending death is ever-present, the poems also convey a great hunger for life, for more of it. They are reflective, meditative, questioning. Not surprising then that Fargnoli uses questions as a rhetorical strategy. How fitting this is since the speaker is indeed questioning both her past and her future. This poet skillfully balances idea and technique and makes them work to support each other.

In the handful of family poems, the speaker confronts her past; where knowledge and memory fail, the speaker imagines what she can't recall or never knew. We find poems about a sick mother, a drunken father, an imaginary sister, and a drunken husband. Notice how poignantly loss is handled in this family poem:

The mother who left in my childhood
is leaving again in my dream.

She is leaving the ghost of a town
and has gone on to the next.

She has left the cottage door open,
the chair still rocking.

My mother is leaving again from the memory
of a white double bed,

her hands pale on the sheets, her face
pale as she leans against the headboard.

The child leans against the doorjamb,
crying because her mother is crying.

Something unbidden has entered the room,
something terribly wrong in the room's raw light.

There are two brown suitcases on the floor.
In the other room, two aunts wait on the sofa.

there was, in those days, no cure
and no slowing it down.

she escaped from the snow that, in that last winter,
fell endlessly and everywhere.

In the field of my mother's absence,
two blackbirds are flying through the wind-driven snow.


Technically, in this collection Fargnoli reaches beyond what she has done before. For example, the entire second section is comprised of one long poem in 15 parts. Fargnoli also invents a new form in Lullaby for the Woman Who Walks into the Sea, a stunning poem recently featured on Poetry Daily. Here we find a good example of how effectively repetition can be used in the hands of a master poet. The repetitions capture the relentless, endless motion of the sea and create a chant-like, pounding music.

We also find a greater freedom and flexibility in line lengths, in the use of indentations, and in the shaping of poems. We find less reliance on the left margin, a greater willingness to spread out and use the full page. (In order to accommodate the poems with long lines, Tupelo used a wider format for the book.) These technical flourishes underscore the sense of motion. Form and meaning come together as they should. The poem, The Parents, illustrates how Fargnoli uses indentations to support the poem's meaning. (When you have the book in your hands, read the poem again and compare it to the online journal's format. You'll see that the book's indentations are more extreme. You'll also find just a few minor revisions. Interesting and instructive to speculate on why those changes were made for the book.)

Take a look at one more poem. Here Fargnoli undertakes the audacious task of defining what cannot be defined—and succeeds brilliantly via the use of negatives, images, and metaphors. She tells us what the soul is not, how our senses perceive it, and what it is like. Thus we come to know it.

On the Question of the Soul

It is not iron, nor does it have anything to do
with the fleshy heart. It does not shiver

like feathers, nor the arrow shot from the hunter’s bow,
is not the deer that runs or falls in the snow.

It hunkers down in the invisible recesses
of the body—its closets, scrolled bureaus,
the ivory hardness of the chest,

or disperses through every cell. And also it flies
out beyond the body.

Someday watch smoke travel through the air.
Someday watch a stain spread out to no stain
in the ocean. The soul does that.

It doesn’t care whether or not you believe in it.
It is unassailable and contradictory: the dog
that comes barking and wagging its tail.

It is not, I am certain, biology.
Not a cardinal or a heron, not even a thrush or wren,
but it might be a praying mantis.

It is the no color of rain
as it sweeps a field on an August morning
full of fences and wildflowers.

It is the shifting of light across the surface
of any lake, the shadows that move like muskrats
across a mountain whose shape mimics the clouds above it.

Weighed down by the vested interests
of the body, it nevertheless bears us forward.


The poems in this collection are tinged by sorrow. There's much to regret, much that's missing in the speaker's life. And yet, for the reader there is cause for celebration, even rejoicing, in finding a life so relentlessly confronted and so deeply felt. And there is joy in the sheer beauty of the poems.

**The poems reprinted here appear in Patricia Fargnoli's book, Then, Something (Tupelo Press, 2009). Reprinted with permission.

Posted by Diane Lockward at 8:54 AM