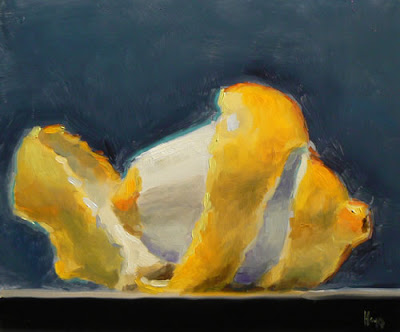 Strip-Tease, by Jeff Hayes
A few weeks ago I wrote about the workshop I took with Dorianne Laux and Joseph Millar. Participants were asked ahead of time to bring an object or picture which seemed to hold a story. I couldn't come up with an object or a picture. The ones I had I'd already used in poems. But then I remembered that a week or so earlier I'd posted my poem "Ecdysiast" along with an image I'd found on Google. When I'd searched Google Images, I'd also come across the above painting by Jeff Hayes. It was posted on eBay along with a number of other paintings by Jeff. Because of the title of this one, I'd thought about posting it with my poem, but in the end decided to go with one showing a woman tossing off her clothes since that's what the poem is about.

But I saved the painting on my desktop as I really liked it. So that's the image I took with me to the workshop. And I'm happy to say that it prompted a poem I rather like and have, after numerous drafts, finished (at least I think it's finished—in a week or so I may change my mind—you know how that goes). Now I've got an ekphrastic poem. Sorry, you can't see it! No posting and poofing for me.

Anyhow, as I got into the poem, I decided to google Jeff. Turns out he has a website and a blog. At both, he posts images of his paintings. He's engaged in a one-a-day project which reminds me of the one-a-day commitment some poets make in April, National Poetry Month. (Not me, though, just can't do it.)

Also turns out Jeff had a little contest thing going on. If you linked to his blog and posted something about it, you'd be eligible for the official drawing, and if you were the lucky winner, you'd receive one of Jeff's paintings. Unfortunately, I lost track of time. The deadline was August 10.

But I really like Jeff's work, so I'm giving him a round of applause here. This is also my way of saying thanks for the poem. I plan to revisit his blog to see if I can get some more poems going. Take a look for yourself. I'm not a painter, but I'm surprised that Jeff paints in oils. Isn't that a lot of cleaning up for a one-a-day project? Also, at the blog or website you can sign up to receive the images via email. Check it out.

Posted by Diane Lockward at 1:32 PM