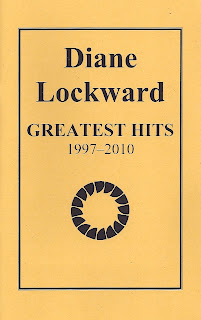 At last! This new chapbook has been published. I say "at last" as it's been well over a year since I was first invited to participate in this series. Although I was told then that the chapbook would be available for that year's AWP, which would have been 2011, that simply did not happen. Apparently, there were some problems that caused delays. In fact, the delays went on so long that I had pretty much concluded that the chapbook just wasn't going to happen.

But happen it did. The original publisher, Pudding House Publications, sold the series to Kattywompus Press. Once the new publisher took over my manuscript, the process moved along at a brisk pace. So I went from thinking it wouldn't happen to a box of 20 copies on my doorstep.

This collection consists of 12 poems, the ones deemed my "greatest hits." Selection was challenging, but I think I have a good variety and all three of my full-length books are represented. The collection begins with an essay detailing the history of the poems. I could provide a list of the poems here, but I'm not going to. I'll leave it to you to guess. Then if and when you get the chapbook, you can see if you were right. Make a game of it!

Posted by Diane Lockward at 1:18 PM